A 2009 Mac Mini is my professional tool, so i like to have it updated. Recently i had already installed 8 GB of RAM, and now is the time to install an SSD. I bought the 256Gb Crucial M4 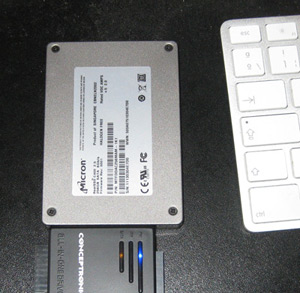 The first is to clone the current HDD to the new SSD. This requires connecting the SSD by USB, it can be done in several ways, including putting it in an USB enclosure, but I prefer to use the adapter "Conceptronic Serial ATA & IDE to USB Adapter" which allows to "hot link" any disk by USB.

In the picture you can see how i have connected the SSD to the computer using the Conceptronic adapter.

Then i started clone the disk with SuperDuper. Two hours later, the process have finished. Obviously you have to look that the source disk has less data than the destination disk capacity.

After cloning the disk, you must disassemble the Mac Mini. On YouTube you can find tutorials on how to disassemble it, and it is quite simple if you have a minimum of care.

The trickiest part is when you need to use a putty knife to opening the housing. A photo of my Mac Mini open and the putty knife i have used:

Then the disk is installed, it is quite easy. In the photo below you can see the SSD already installed. 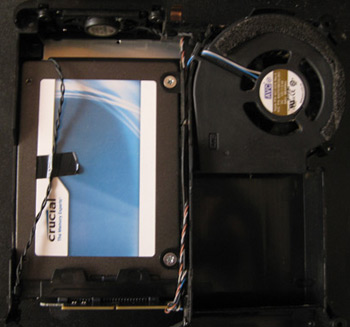 Well, once the unit has been reassembled i do the following:

Reset the PRAM: It is good practice to reset the PRAM each time you install new hardware:

1. Restart your Mac and hold down the key combination Command-Option-P-R.
2. Keep these keys pressed until the Mac is restarted twice (sounds twice the boot chord).

Enable TRIM: Currently the Snow Leopard has no native support for TRIM, but you can activate it with this fix: TRIM Enabler for Mac. It is important to activate it so the speed of read / write of the SSD does not degrade over time.

Update the SSD firmware: This step is not so important, would be rather a further step if the SSD give any problem.

The initial improvement in performance with the SSD is AWESOME. Adobe Photoshop CS5 starts in 4 seconds, the boot time of the Mac is 9 seconds, and the SSD uses less power than any HDD, no noise at all and no moving parts that could be damaged by a hit. It is an expensive buy, but it is the best improvement you can do to your computer.